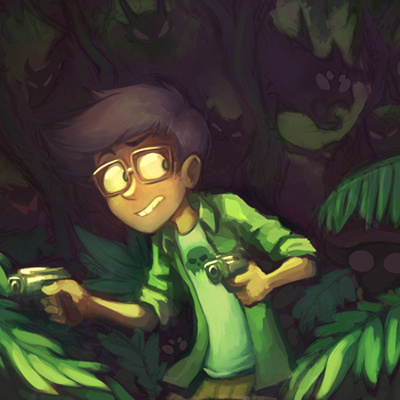 First of all I have this unreasonably intense love of Jake that I can’t really entirely explain. Uh. So I definitely wanted to do a song for him. The main idea I started out with was that I’d do a song with two parts, the first part representing Grandpa Harley, then I’d have it morph into the second part, which would be for post-scratch Jake. I first thought of having a literal record scratch but man that sounded dumb :] I referred to the first part, to myself, as Grandpa Harley, and the second part as Hellmurder Island.

For the Grandpa Harley part, I spent about half an hour listening to/watching ragtime piano and vaudeville acts on youtube, to refresh myself on the types of intervals and suchlike that they used. Then I just made it up.

I wanted to make Hellmurder Island really dramatic. I had some (not particularly complicated) scenes of Jake running around on his island that I was making it a soundtrack for. Like…the first section is just…running around in the jungle. Then there’s him standing at the top of this huge waterfall, and some birds take off, and the last part is him fighting something or being about to enter the SBURB session. Whatever shit is about to get real for him. :3

The song is mainly influenced by ELO’s ‘Jungle’, haha. Mainly in the way it goes, “duh DUH, duh DUH!” I love how that sounds. I tried to do more jungley percussion but it didn’t end up sounding that good. I made the drum track in this app, which I pretty much use for all my drum tracks cuz it’s awesome.

I did everything except the guitar - which was my bandmate playing - in Garageband using my midi keyboard and various soundfonts. I’m so in love with the one that does the main melody. It’s a flugelhorn. It just sounded so much like Jake to me!