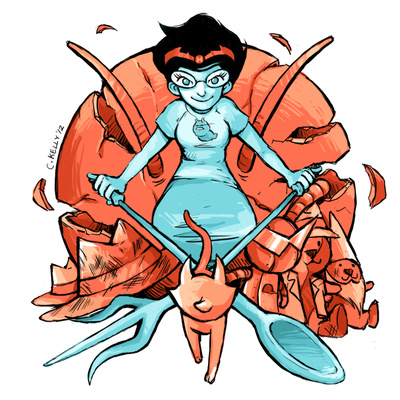 This piece started as an offshoot of a song that was very loosely based on John and Jade’s three year voyage between the two windows. I felt that the theme that became the chorus to this piece needed to be at a higher tempo than the rest of that song so I took it out and based this tune around it instead. It was originally titled ‘Heir of the Dog’ as I was still thinking it could be either a Jade or a John piece at the time and wasn’t certain who I’d end up submitting it for (also because terrible puns).

Technical note: Although the piece features keyboard and guitar solos the bass was actually the hardest part to play, in particular during the chorus and the part behind the guitar solo.

Extra: This is no longer true since I recorded the video. For the original recording the two handed parts in the verses and the outro were originally done as 2 separate takes for each one. It wasn’t until I started the video that I thought ‘I could turn these into single parts’ and made things really difficult for myself.