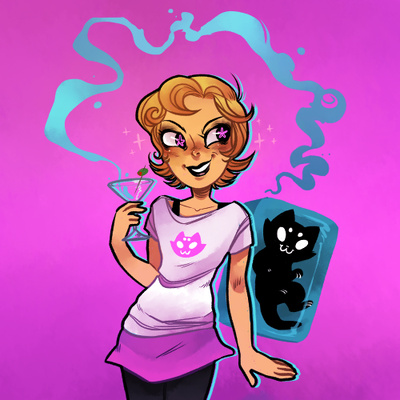 I don’t want to clog up the audio post so I figured I’d make a separate post for my reasoning behind the different parts of the song!

First off, the song itself was inspired by the mental image of Roxy jumping through fenestrated planes to get to a bunch of different places (hence the name Void Hopper). I tried capturing various aspects of her interests and personality through the different sections so it’s less of a Theme For Roxy than it is a Song About Roxy. There is still a particular melody that can be heard throughout all three major sections, so I suppose could be the MAIN THEME?

This section is meant to represent her childish and playful side. Roxy always seemed to have this child-at-heart quality about her, what with her infatuation with cutesy wizards and her bedroom in the beta session.

The beginning is an obvious nod to Harry Potter. She’s totally into wizards so I felt it was appropriate. It then turns into a waltz rendition of Jasper’s theme because she is also totally into cats. Then we have a neato transition that I guess could be her travelling through a window or something? I put a spacey sounding pad there to emphasize the VOIDINESS of it.

After the transition, it picks up speed and has a variety of computer-y and sci-fi effects to hopefully capture her HACKER attribute. The bassline to Aggrievance can also be heard here as a callback to the STRIFE! between Mom and Rose. After that, we have the main theme again, this time accompanied by a busy slap bassline because I love slap bass. This and the following parts were an attempt to convey her get-shit-done attitude and her assertiveness with what she believes in. It could also be a cool action sequence. I imagine her rushing to reach a destination in time by jumping through windows and stuff all badass-like and it’s a pretty fitting mental image for her I think!

Anyway, after this, it all ends with a booze snooze. The song slows down and gets kind of tipsy sounding before glitching out into white noise.

Roxy is asleep and we are now on Derse. This last section is meant to represent her sleepwalking around the void. We have a little sad sounding ocarina melody which then makes way for the main theme to play one last time on violin. The song finally ends on an ominous and spooky note as Roxy drifts further and further into the void.

Wow I did not expect to type this much. Anyway this song was a blast to make and even if it’s not accepted, I still learned a whole lot! I hope you all enjoy listening to it as much as I enjoyed making it!