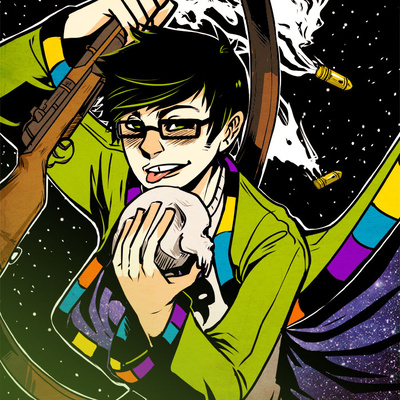 Dapper Dueling was inspired originally by a Steampunk band named The Cog is Dead - after listening to the song I just linked, I tried to take down the general feel and basic instrumentation, and then work on my own from there. Instruments used in the piece are:

I also gave the original Showtime strife mix a few listens for the purpose of structuring my piece - after all, it’s meant to be a Strife theme. However, pretty much all sources of inspiration were only used in the parts before the banjo solo; the rest was just me having fun with music.

Let me also point out that it made me extremely happy to see in canon that Jake bounces from side to side before he is about to fight; it was the exact image of him I was hoping for.

Also, while composing, I imagined Dapper Dueling to fit a fight scene similar to this, from Sherlock Holmes (2009).

This was my interpretation of a Jake Strife theme. After the intensity of Cobalt Corsair I wanted to make something fun to listen to, and ended up with this. Imagine Jake English bouncing nimbly from side to side, facing off to wrestle his eager opponent.