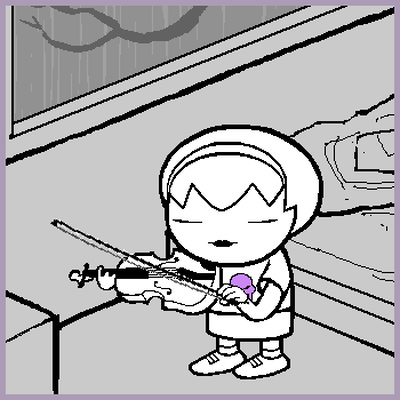 Ahh, the glory days, when we had no idea we were going on a universe-destroying/creating adventure, or even a world-destroying one. This was when the music team's main scoop on the kids was that they were going to have theme instruments that somehow function as their weapons or special abilities as well, although I guess this has only mostly come to fruition with Dave's turntables. Well, I'm primarily a violinist, and Rose's instrument was to be violin/strings, so this was right up my alley. I love just randomly improvising on the violin, exploring different poetic areas, if you will, and coming up with things that sounded beautiful to me. At this time in particular, I was doing that a lot. Hadley's Aggrieve was created first in this case, and I had roughly dictated it, so I knew the notes. I fooled around with it a couple of times, playing with a haunting/sad-but-hopeful tone, and the arrangement that you hear was recorded literally the first time it was played - the first time those notes were played in that rhythm, tone and order was the same time it was recorded. That version, cut, is what you hear in the comic. I reverse-engineered the sheet music from my own recording to do a recording for the album. Unfortunately, I was, and I suppose am still today, new to the recording game, and so there are mistakes I cringe at in both the comic and album versions. Gabe Nezovic's mastering helps to cover most of it, but I still feel kind of guilty about it. Oh well.