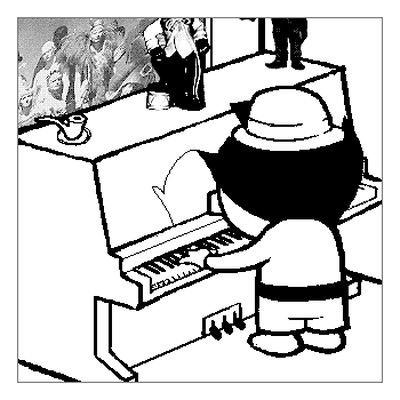 To be honest, I've fallen off the MSPA train pretty hard. This has undoubtedly been the busiest year (or two) of my life, and I am only now returning to reacquaint myself with what the heck is up.

Malcolm wrote the chiptune version of Showtime first. I heard it, dug it, and created a piano arrangement just for the hell of it. Like Malcolm has said - earlier on, we didn't necessarily know what we were writing for, so we just wrote whatever spoke to us. I had posted a "Work in progress" version to the music boards, and I received some positive feedback. Positive enough for me to elaborate it into a full piece. As luck would have it, Andrew was finishing up the first playable page of Homestuck just as I posted the full version. As such, I was lucky enough to have the honour of first musical appearance in Homestuck, but most of the credit should certainly go to Malcolm - for defining John musically at such an early stage of the game, and for being the sole inspiration behind this track.

Oh, side note: My midi keyboard was misbehaving when I wrote this, so every note of the piece was clicked into a sequencer. D: