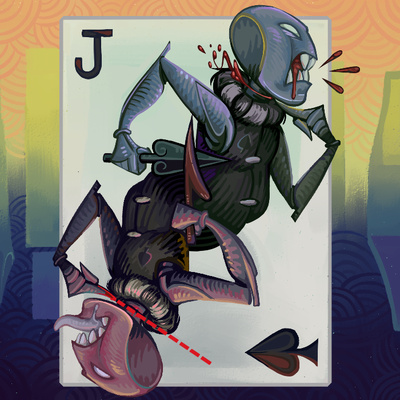 This tune got some pretty cool art from kendle bentley b! at electroluxx.tumblr.com. I don’t really know anything other than ‘wow, that’s really cool’.

So let’s talk about the track. I said a little bit about it when I posted it but I thought I’d expand a little.

The piece is written for the Alpha kids’ version of Jack Noir, in particular his attempted jailbreak. Unsurprisingly then every guitar stab is supposed to represent Jack stabbing something. In the original version there were actually more stabs at the start that got cut fairly late in the process because while more stabbing probably suits the character it made the intro feel too long.

As the tune is for a Jack I thought his piece should be based on the Black theme. I’d been thinking about doing a take on it for a while but hadn’t figured out how I would do it until the jailbreak scene started. At the same time I’d been struggling to write the verse for the Jane song (I have that bit now but I’m still working on the song) so taking a break from that to play a lot of angry distorted guitars also seemed like a good idea.

The guitar solo is really hard to play.

Originally it was just going to be a fairly loose guitar jam over the chords from Upward Movement but while that was a lot of fun for me to play it turned out it wasn’t that much fun to listen to so I figured it was going to need some more backings. This led to the inclusion of a number of themes from Descend building up and then a little interplay in the strings at the end. Unfortunately this meant a loose jam style solo wasn’t going to cut it anymore so I sat and wrote out the solo you hear now. I threw in a quintuplet and a 5:6 tuplet because apparently I hate writing things I can play.

When it was all done I uploaded it, blogged it and then tried to sleep while my phone kept going off until I turned off alerts. I didn’t really expect anyone to pick it up but it surprised me by being the most popular thing I’ve ever posted by a long way (thanks Radiation!).

The next day I got a message from Radiation saying he’d like to include it on the album (which turned out to be volume 9). So I went back and tweaked the mix a bit (mainly turning down the gain on the guitars and bringing out the strings in the descend section) and sent him the final wav which is what’s on the album. I’m really grateful to be included on the album and I’m glad people seem to like the track.

Fun if somewhat nerdy fact: The power down sound that leads into the guitar solo section is actually the sound made when the Hammond organ is switched off while holding down the last chord. The tonewheels inside the organ that generate the pitches start to slow down before the amplifier cuts out so you can hear the pitch lower before the sound stops.

After I posted Noirscape it got added to the tracklist for LOFAM2 and straightfacedgriff had actually started doing art for it before I had the chance to quietly let them know that it wasn’t going to be on the album. The art pretty much sums up the scene the music was meant to be describing at the start though (assuming jack has a few more knives up his sleeve for the other guards) so I thought I’d include it here. 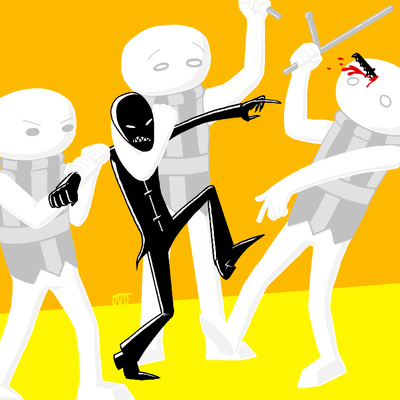