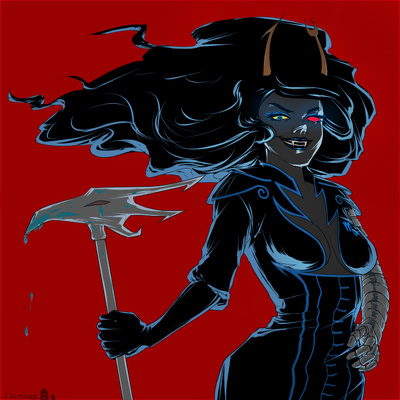 For those of you who didn’t know, Cobalt Corsair was originally a theme for Hussie. The song being given to Mindfang, while some find it hilariously ironic, I find to be a lot more fitting. I do have a tendency to write piratey sounding orchestral songs; this time it just happened to be accidental! For this commentary, I’m going to be dividing the song up both by sections and instrument groups.

I always wanted the piece to sound dominating and over-important, at least for this part. It begins with a solo flugelhorn playing its melody, providing an entrance for the rest of the orchestral. After not too long, the trumpets blasting out their fanfare in perfect 4th intervals, the lower brass backing them up with a strong chordal harmony - the brass works to create a very regal sound. Though Hussie as a character isn’t anywhere near this serious, I felt that it wouldn’t hurt to portray him in such a way - the way his character sees himself. The whole thing reeks of overlording and power, which, as it turns out, seems to fit the pirate idea nicely.

This is where the piece changes from 12/8 to 4/4, and the solo flugelhorn returns to introduce the new section. I imagined this to be the other side of Hussie, calculating, always working, creating his world. The whole section is just a build up of instruments, as the lower string ostinato loops itself over. There isn’t really much to say about this section, but it certainly works as a contrast for the rest of the piece.

This is the final minute of the piece, just after the moment of silence. It explodes into a wall of sound, seeking to bring back the power of the first section in a more open way. I actually wrote part of this section before working on the rest of the piece, so naturally, it’s what set the general tone. My favourite melody is introduced in this section (played most obviously by the flutes), and I regret not being able to flesh the idea out more. The piccolo part rising above the rest is interesting - it fits perfectly in with the whole pirate theme, despite me never considering this to be a pirate song. I suppose I consider this section the execution of various plans, to a successful conclusion.

Now, as you can probably tell from listening, Cobalt Corsair is very dense texturally. To give you a visual idea, here’s a post from a little while ago showing the layout of the sequencer. It's big.

So, I’ve decided to chop the piece up in terms of the instrument groups, for anyone who wanted to understand what the hell is going on underneath all that sound.