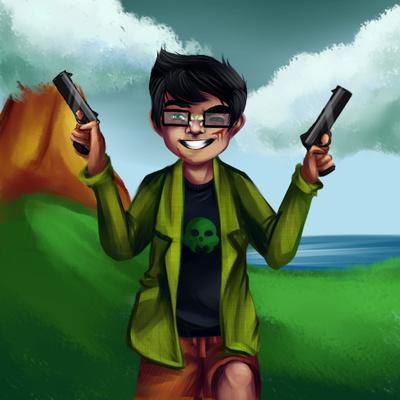 So back in the early days of Volume 9, the idea was “The New Session”. The further idea was to take the tracks ‘n themes of Volume 1/Act 1 and ‘re-scratch’ em to come up with a parallel for the new session and the new kids. Where this idea started to fall to bits was expecting the act to play similarly to Act 1, which it quickly didn’t :)

Still, by this point we had a decent collision of re imagined classic tracks and Strife/character themes for the new kids, so on with the show.

Encore was a straight-up “Let’s bring Showtime kicking and screaming into the new session, but a little bit mixed, yet still recognizable”.

Most of the voices come from EWQL’s Symphonic Orchestra, with a bit of soundfonts for the later Showtime segment.

The section at 0:22 has a bit of history - It was originally a straight up Lifdoff arrangement, but I pulled it back and made it considerably less obvious (I’ve became hesitant of Lifdoff since someone pointed out it sounds like the Bruce Lee story theme :p) - I *did* leave the little brass phrases that punctuated it, which unintentionally/subconsciously might be referencing Earthsea Borealis. This wasn’t intended, but it’s probably close enough for it not just to be a coincidence, and enough people seem to be picking up on this accidental reference so what the hell :p

Next it returns to the alternate Showtime and adds on Unite Synchronization. Does a floaty little bridge afterwards, and then we get into the original Showtime.

I pondered adding this for a while, since it felt a bit “Yes, we get it, this is a Showtime thing, y’don’t need to actually add the thing in”, but eventually I liked the idea of it smashing in, completely brazen with its NES-y soundfont and blaring the original track in the last section of the song. We then wind down with the fast-paced percussion and the starting brass arrangement, just enough time for a post-battle ass-kicking pose, and then “Boom”.

I think writing tracks for characters like John/Jake’s quite fun in that they’ve got this bottomless optimism and carefree attitude, plus they do silly things. Silly things are quite fun to score...

And that’s Encore! Hope ya’ll enjoyed that little trip back down memory lane!