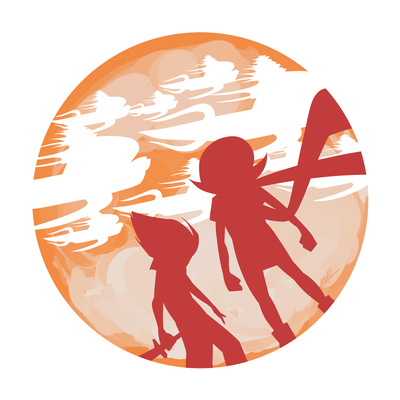 Tracks that Another Jungle references:

Tracks that reference Another Jungle:

Flashes & games that feature Another Jungle:

Before this track was used in Homestuck along with Beatfox’s “A Taste for Adventure”, it was actually made for a nearly 3-year-old defunct fan project. Housetrapped was a story about an alternate Sburb session and “Another Jungle” was a the-same-but-different theme for the loading screen of that universe’s Sburb client. Sound familiar?

When we shifted into gear to create new Homestuck music following the start of Act 6, I was asked to refurbish the forgotten 40-second theme I’d written as the theme to Sburb Alpha. “Another Jungle” is thus the alpha equivalent of “Sburban Jungle” which I had written back when Homestuck began - structurally both songs are very similar, but each with their own melodies and sound choices.

“Another Jungle” has the benefit of years of experience with production I did not have when Homestuck began, and to me the fidelity difference really shows. Since writing “Sburban Jungle” I’d become far more familiar with automation, recording, eq, mixing, mastering, and all the techniques that polish a music project. “Another Jungle” is far more dynamic than its predecessor, with each subsequent section of the song having its own unique way of using the instruments and sounds in the project.

My favorite touches to this one are all the very mellow sounds that contrast with the brisk pacing of the track - the various pads, the wah-wah guitar, the echoing melody, all of it underlined by drums and brute synth loops. The sudden change in energy when the guitars duck out in the middle and the melody of “Showtime” whispers in is a favorite moment of mine. The very pop ending with its retro house sound was another choice I wouldn’t have seen myself making three years back. Hope you enjoy this one as much as I do.

The art for this track is by Richard Gung.