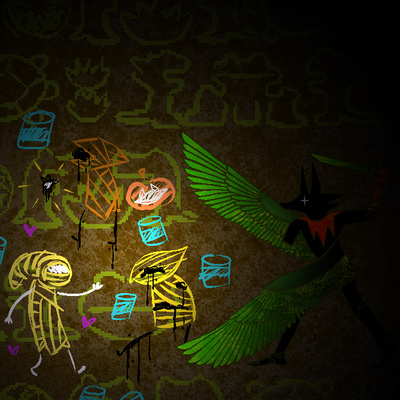 I wrote Unforgiving Terrain shortly after The Wanderers album came out. It was just an excuse to have fun with sound design and listen to Carapacian Dominion over and over. It's called Unforgiving Terrain because titles are hard. The project file is called Frozen Ruins but I guess I didn't use that name because I ended up not including Frost like I had planned.

After the original art file crashed like a piping hot baby on a meteor, I decided to create an Egyptian hieroglyphic-ish piece for this song because you know, DESERTS and WANDERERS and WOW JUST GOSH. But I also wanted to add in some of WV's little cahlk drawings too because it's cute! I mean, come on. Look at them, being happy and carefree and unaware. Yes, I know deep in my heart that this story will have a very happy end. No doubts about it. *insert evil laughter here*