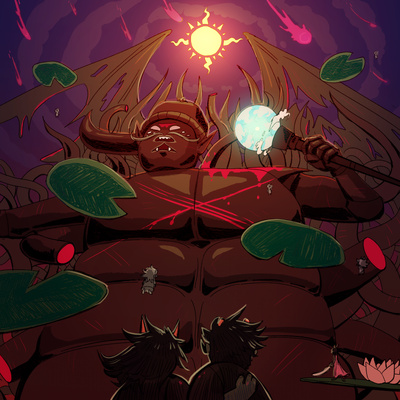 (Final Battle Against the Black King)

Or "King of the Twelve Angels" in Google Translator Latin.

This was designed as music for the EPIC yet only hinted at battle between the Black King and the Trolls at the end of their game. Rather than making it a fast-paced action-centric doom-fest, it ended upmore like some kind of apocalyptic dance number: The Trolls, despite going against fairly tough odds, all banded together under Karkat's leadership into a well oiled, tactical nuclear force that managed to overcome the Black King and beat the game.

It is, along with the unique 'Black King's theme, more or less a combination of various Troll themes arranged in order of attack. It's probably easier to just explain what's going on where:

0:00 - We start with the black king's introduction, Aradiabots from doomed timelines teleporting in and assembling, the reckoning beginning, the Vast Glub being suppressed.

1:34 - At this point, the fearless leader steps into action as the first to attack (Crustacean). I like to think this move shreds any sense of doubt they had in Karkat as leader at this point. Karkat's theme's quite fun to work with, so I enjoyed this bit.

2:03 - Terezi made sense as a logical follow to Karkat (The Lemonsnout Turnabout). It starts off quite simple yet more organised than Karkat's section, representing Terezi's initial appearance as a fairly harmless, blind Troll girl, before building up to her surprise attack. I'd already mucked about with Terezi's theme in my other track, but this one I think is a bit more faithful to the original.

2:56 - Tavros in his Jet Car (dESPERADO ROCKET CHAIRS,). There's a hint of tragedy to Tavros' character that I think comes through here - His melody kinda builds up but just as he's about to act it kinda fades back down. Ah well... The world's smallest violin is playing the intro trumpet section to Tavros' original theme here.

3:15 - Kanaya, being quite graceful and yet incredibly deadly (Virgin Orb). She pretty much stops the music and focuses all attention on her - Something she'll do again in the future. I really like the opening of Kanaya's theme, so this is one of my fave bits. The chainsaw is also quite a fun touch.

3:34 - Equius decides to step in and show people how it's done with the might and efficiency only a highb100d could bring, and indeed he probably would, but Nepeta keeps being silly and sneaking in some attacks (Horschestra & Walls Covered in Blood). It was a bit of a faff combining these two, but I liked the idea of Equius' almost military like anthem being interrupted by Nepeta's calypso funkiness.

3:53 - Feferi and Eridan move in (Keepers). These two have worked together before, and provide a potent force against the King.

4:36 - Sollux and Aradia decide to now get involved having kept the King's psychic powers in check (The La2t Frontiier & psych0ruins). I took more or less the openings of both themes and tried gluing them together. There's also an additional bit influenced by Aradia's in the 2nd half.

4:56 - Based on Karkat's description on what Gamzee's contribution to the fight was, I figured having Gamzee 'parody' the King's theme worked better here. The music doesn't even really imply what his attack was, only that it built up, was unleashed, and surprised the hell out of everyone...

5:14 - The King's nearly defeated and getting desperate.

5:39 - Vriska steps up, and finishes it. With one impossi8ly lucky roll.

I'm incredibly flattered to have such an awesome track feature so many pieces of music by myself... another miracle from the guy who brought you Showtime, folks.

Definitely the peak of intensity on the album. 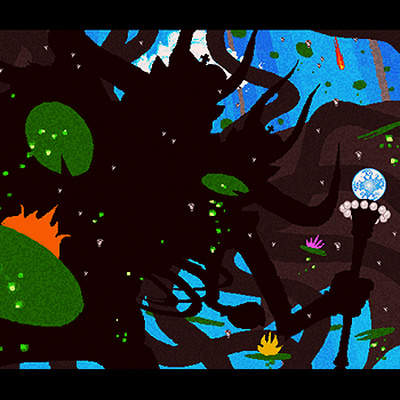