Previous: Land of Fans and Music 3

Previous: Land of Fans and Music 3 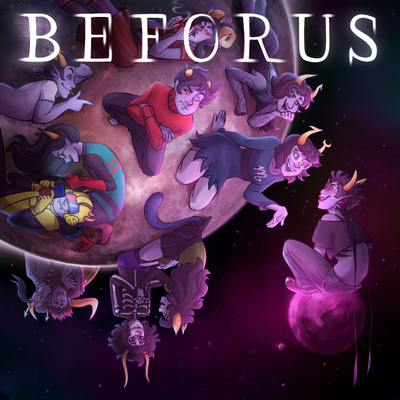 Track commentaries authored by the respective fan artists and fan musicians. Track art is the property of the individual listed visual artist. The Beforus fan album and related media are brought to you by the Beforus Album Team and Blackhole Media, and are unofficial fanworks based on Andrew Hussie's Homestuck.

Homestuck is a property of Andrew Hussie and What Pumpkin.

I'm so grateful for the privilege of illustrating the album cover! I don't think I've ever put so many characters in one illustration before, so it was an experience trying to fit them all in together. It's based off of where the trolls lived before starting their game, with Meenah having run away to the pink moon while everyone else is on Beforus, as well as my track art for Cosmic Malfunction by Ducky Senpai, which also has to do with people chilling on space orbs. It was really hard to find a balance with all these guys, while at the same time knowing it has to represent the entire album and all of the people working on it. It was a unique challenge but I had a blast, I hope I did it justice!