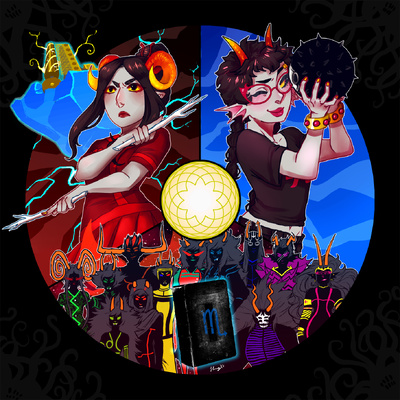 This song can be interpreted as being about the Scratch from the Beforus trolls' point of view. I wanted to write a song that had a suspenseful single-note intro, similar to in the song English from the Homestuck album The Felt. I wrote the song to be dramatic because the Scratch, for them, signifies the end of their roles as players in their session.

I wanted to show the initiation, the process, and the result of the Beforus trolls' scratch. Damara, happily volunteering and having the power in the first place, initiated the cardinal movement, and Meenah blowing up everybody so that they would continue to exist as ghosts, and the result, their alternate selves born in a whole new world and society. I put the ancestors because they had a role in preparing the Alternian trolls to be stronger to win the game and that all started with the alpha trolls scratching their session in the first place.