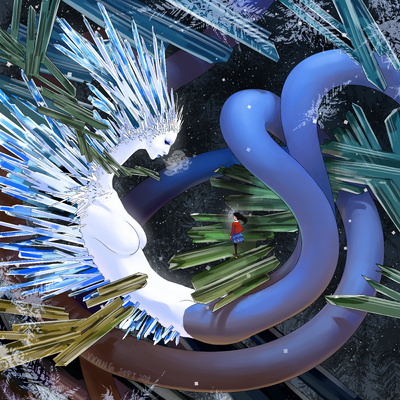 Bargaining with the Beast

Bargaining With the Beast was a doozy. With little conscious attempts at maintaining structure (other than the section after the intro, which appears a few times to hold things together), it can come off as a wild ride through a bunch of interesting ideas just sort of strung together like a glass mobile made with craft glue and shiny twine. And that is a pretty accurate description.

The piece was sort of an experiment for me, filled with a lot of concepts that might even have needed a separate piece to flesh them out properly, but I made this piece with the Volume 8 submissions deadline looming over head (I think it was a little under a week until final decisions on tracks were supposed to be).

This is also an example of a piece where I set out with a clear mindset for what I wanted. Seeing there was no piece based on Echidna and Jade’s encounters (Radiation didn’t show us his tracks until around when the order was being decided hehe), I wanted something majestic and regal, something befitting of a monstrous queen in ancient stone halls of a frozen world. Eventually it developed into a sort of audio tour of Echidna’s palace and highlighted the conversation, never fully revealed, that took place between Jade and Echidna as they struck a deal.