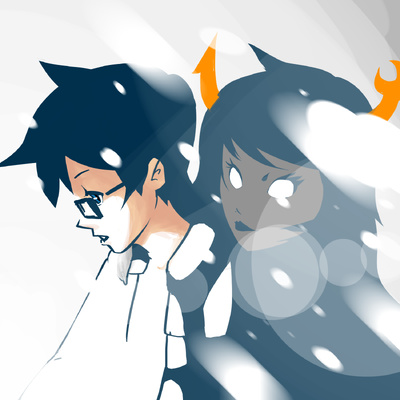 Tracks that Do You Remem8er Me references:

Tracks that reference Do You Remem8er Me:

Flashes & games that feature Do You Remem8er Me:

Alas poor Vriska. This scene stood out quite a bit from the Scrapbook Near-end-of-act Scratch-a-thon as being yet more humility to Vriska as a character - first hinted at during John's talk with her around the whole 'lifdoff' time (which is also why most of the song is taken from lifdoff.)

The idea was to create something vaguely romantic and a bit tragic for the whole 'd8' thing. I used lifdoff as a starting point because that's become my sort of unofficial 'John' theme - It's quite light and goofy but reasonably heroic and fantastical. Showtime shows up at around 2:17, shortly followed by a slightly modified lift from Death of the Lusii (as mentioned previously in this topic). After that it slides into an additionally modified version of Ruins/Awakening for reasons that are hopefully obvious and also because I like that tune

The main reason I made this is because Vriska's had a but few moments when she wasn't terrorizing everybody and generally acting the huge bitch. Add to this the whole 'fat vriska' thing, and the very bombastic music she's had thus far... It was nice to give her last bit of humility a soundtrack.

And the reason Vriska's actual theme doesn't show up anywhere is because I find it difficult to work with as it's kinda crazy /excuse.

It took me about half a day to get the tambourines sounding decent and they still don't sound like what I imagined they would...

Also I was trying to channel some of the style from the music of the Little Big Adventure games. The soundtrack for thems' awesome and ya'll should go listen to it!

“DYRM” was essentially cre8ed as a sort of 8acking track to the John and Vriska ‘date’ sequence (around about here). The idea was to do a sort of schlocky romantic 8allad that combined elements of Johns goofiness but with the tragedy that hey - Vriska’s dead. Over the course of it, we travel through John and Vriska’s memories, and she’s trying to get him to remem8er something important, so there’s that element too. It’s kinda sad, 8ut in a way it’s also a 8it of a cele8ration of Vriska - She’s surprisingly polarizing with a lot of the fan8ase, as the 8est characters often are... :p

I can’t immedi8ly recall if the phrase “Do You Remem8er Me?” is said by Vriska........ I think it was, 8ut it’s a faff trying to navigate around that 8it of the comic (I often like na88ing song titles out of the dialogue itself - That’s where At The Price Of O8livion came from and of course Sea Hitler’s Water Apocalypse. If not, well it felt like as good a title as any. :p The ‘8’ helps immediately recognise the subject matter.

It’s primarily “lifdoff”, which I started using a sort of personal theme of John. Other slight inspirations for this track are “Anthem Part 2” from The Truman Show and a little 8it of the music of Little 8ig Adventure (primarily the use of woodwinds/percussion).

It starts off with a simple lightened lifdoff, which carries it for a while. The percussion at 1:09 was fun to sequence - It’s mostly just a collection of taiko samples from the EWQL play library that are quite fun to work with, particularly some the articulation (The ‘roll’ you hear is one of ‘em). What I think works quite well is the power of the Taikos with the lightness of the woodwinds - Gives it quite an emotional punch.

1:33 is almost directly L8A inspired (The layering of the woodwind melody on 8rass I’m sure I got from there). At this point we’re 8uilding up to play the ‘Death of the Lusii/Awakening’ 8it with a sort of alternate chord progression, but we sneak in a Showtime reference around 2:16.

2:26 is meant to directly correlated to These Two panels and is a reference to this track.

Then it 8uilds up to the main section of Awakening at around 3:30. Given that the main theme is a sort of dreamlike afterlife, it felt appropri8 ::::p

And we end! Uncertain cadences all round!

Overall there’s quite a 8it I like about this one. The Percussion doesn’t vary much, which lets it down I think (It’s 8asically just the same loop for most of the song, something I’m hilariously guilty of in most everything I make :p) but it did the jo8 in giving Vriska a good sendoff.

I also fully suspect I missed some ‘8’s somewhere........ This stuff’s harder than it looks. God help me if I try to commentary another gorram Terezi track ::::p