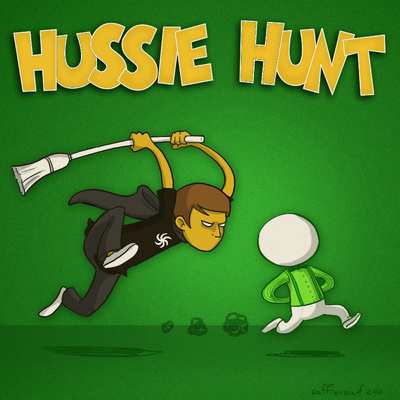 Hah! If 'Sneaking music' was a genre, here's another one to the mix.

Basically, heavily influenced by the Pink Panther theme (You know the one). While making this all I could imagine was a bizarre Andrew Hussie Elmer Fudd hunting 'Scwatches'...

More or less my first attempt to do something in this style. Also, surprisingly, most of it was played live on keyboard into the sequencer (not something I normally do) and then heavily quantized to fix my wonky playing. It gives it a slightly more organic feel, most noticeable on the chords during the 'Explore' section at the end (Which may also owe a little bit to the Monkey Island soundtrack).

Basically a bit of music for Andrew's huntin' of Scratch shortly before the end of act. Included is the "AAAAAHHH FUCKING WOLF!!" moment for good measure (That was added after the first draft to Rad's suggestion). There was even talk of getting some grumbly vocals from the man 'imself, but alas...

Had quite a bit of fun doin' this one. Also quite proud of the name Even if I do have to occasionally explain it to people who don't read the comic...