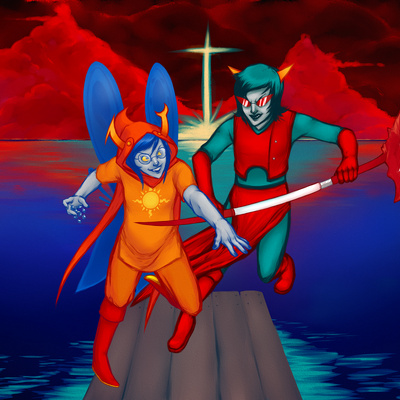 “Revered Return” began as a track called “Dirgeish”, a .pxtone composition that Nick had completed some time ago but never managed to squeeze into an album. Because as a chip tune it had been long overlooked, I decided to take a whack at producing it in a different style for inclusion on Volume 8. I had been looking for a piece that would work as a rock tune, and “Dirgeish” really struck me because of the heavy involvement of drums, its steady pace, and dynamic structure.

The unique challenge of arranging “Revered Return” was pinning down exactly what was what - “Dirgeish” had maximized use of its resources as an electronic composition, shifting instrumentation several times in ways that wouldn’t translate to a rock context. I found myself in a very subjective position, kind of picking and choosing what things would stay in and what things would be changed, while overall trying to maintain the original structure of the song.

The structure I think might be the most unique part of “Revered Return” - it doesn’t waste time by really repeating itself a lot. Nine out of ten times I work on a song I find myself writing or arranging something that moves in a very basic structure like ABAB or AABA or other variants, etc. “Dirgeish” gave me the challenge of establishing coherency in a piece that seemed to move almost completely linearly, and I made sure to preserve its sort of ABCDEFGBA-type structure in arranging “Revered Return” for Volume 8.

Remember that thing about ORGMaker? Yeah, this song, too. Except add me asking Andrew Huo to help finish it and Bowman to ramp it up, and you’ve got Revered Return. :3