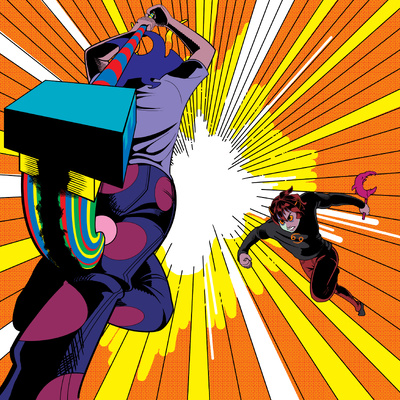 “Calamity” was inspired by the very same update that inspired the Pantskat craze - the image of Gamzee returning, Warhammer of Zillyhoo in hand is translated into two sonic elements, ie honks and chanting. What I’ve enjoyed really intensely about Andrew’s sense of humor in Homestuck and his other adventures is his gradual elevation of silly details onto the pedestals of utter drama, and with this track I tried to recreate that. You laughed at the honks and the chanting before - now your heart races (at least I hope).

There was a certain difficulty in making “Calamity” really work for me. I had a couple of different sounds I was attempting all at once, each working on their own but sort of fighting for control when mashed together. The introduction and conclusion of the song using a theme from “Walk-Stab-Walk” needed to be really punchy, while I really needed the middle of the song to glide, and the connecting bits with the chanting needed to build and build in tension. There are a lot of different sounds in the song’s palette, the most difficult of which to utilize was the enormous saw synth that dominates the middle. Getting that thing to be grand without utterly overpowering the rest of the song was incredibly difficult.

Overall I was really satisfied with how much excitement there is in this song. It’s got a big simple melody but it doesn’t outstay its welcome. As the album opener, it sets up the stakes and excitement of Homestuck without sort of beating the point into you by lasting too long. I think of it as a cousin to “Sburban Jungle” or at least another song approached in that dramatic, electronic way.

The countdown sample is from a NASA recording, I believe it’s the launch of Apollo 11.