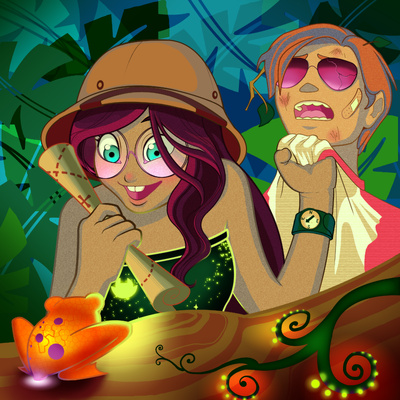 Uh oh, Jit and I showed up to the album with the same song idea. That’s like two girls showing up the party in the same dress. Awkward! Good thing for Jit and I that, like the two girls in that famous scenario, we each have our own swagga and wear those dresses like the hot young messes we are. Wow, don’t quote me on that. (Too late - DPF)

Anyway, while “Frog Forager” is almost immediate in its “aw man, yeah, it’s THIS kind of tune” factor for avid listeners of Homestuck music, my ditty “Frog Hunt” seems to hit a lot of people out of left field. Maybe it’s because I was busy surprising myself with this one as well.

I’ve mentioned Weather Report a few times as an influence, and while I can’t bring even a fraction of that band’s musicianship to my work, I really attempted to bring their sense of atmosphere to the piece. There’s a lot of elements thrown in there - the wacky time signature (17/8 if I recall correctly), the meandering syncopated piano, the funk breaks, all that latin percussion, plus a pile of odd sound effects. I threw in some frog ambiance using some really odd synthesizers and a toy accordion as well.

The point of this song was to kind of put the action, the drama, and all that teenage chemistry on hold so I could focus on a moment in the story that might be just a little bit more peaceful. Going on a safari for frogs on a newly-awakened alien forest world seems to beckon a very different angle than the heated stakes typically associated with Homestuck. Plus, I’ve always felt that the environment of Homestuck deserves a little more attention given that nearly 99% of all art generated by the fans are homages to their favorite characters and not the fantastic places imagined by Andrew.