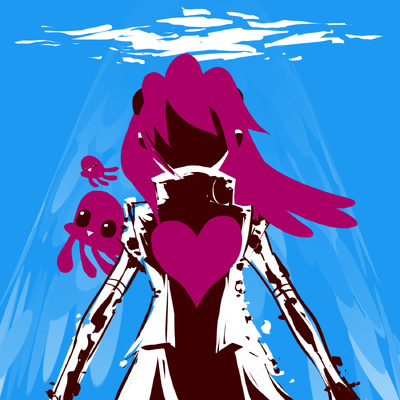 The Squiddles! album gets no love. There, I said it. I’ve mentioned before how awesome it is and how dramatically it has undersold compared to the rest of our material, but apparently everyone is too terrified of its My Little Pony meets Cthulu approach to give it a shot. Trust me, you’ll like it more than you think you will.

Anyway, one of the most surprising tracks on that particular album is “Ocean Stars”, a peaceful, mysterious little ditty imagined by Mark with a nautical theme in mind. I thought it had a beautiful little structure, and I guess the song must have stuck with me because at some point I found myself playing its chords over and over on my keyboard faster and faster until I was sure it would make for a great little indie rock inspired track. So I did just that.

This song takes its cues most heavily from “Regatta de Blanc” by the Police and “Life in Technicolor” by Coldplay - the meditatively simple rock backup is accompanied by a huge chorus of wordless vocals provided by countless overdubs of Tavia and myself. These middle voices are bookended by the twinkling bell sounds in the high range and the rumbling drums and guitar in the low range to make for a very full mix that really surprised me with its depth. I threw in some slowed-down bubble sounds (the same samples from “Mister Bowman Tells You About the Squiddles”) to create the ocean ambiance, something I’d really gotten the chance to hear on a scuba dive I’d done over the summer.

This is another example of a song that has the “just right” feeling about its length. I could probably have easily repeated the vocals endlessly as though I was attempting to induce transcendental meditation - it would probably have had the same effect as “Hey Jude” or any number of other great songs. Owing though to my sense that this album was going to be a long one (my contributions alone come out to more than 20 minutes of music) I decided to capitalize on having achieved the harmony and just let it end when its thought was fully expressed, not unlike the original composition by Mark.