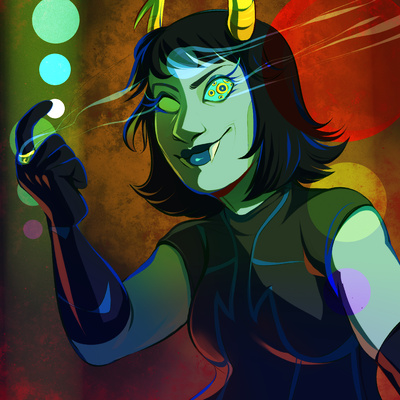 Thief of the Ring

Tracks that Thief of the Ring references:

The One Music Maniac:

"Thief of the Ring" is a pre-GAME OVER themed composition that covers Aranea's selfish motives & how it caused the imapct of GAME OVER, including: possessing Gamzee to steal the ring from John, almost forcing a kiss on Jake, forcing Jake to use his Hope power, killing Jade, getting angry because John promised the ring would be for Calliope, forcing Roxy to sleep, having to fight Brain Ghost Dirk as he rips her soul out of her body, and causing Jane's vengeance for the death of her ectobiological granddaughter.

The music, with its beat, and of course its theme that ties into GAME OVER, I naturally went towards bold colors and contrast- which is actually a staple of my art! I focused on the motif of the ring itself, and Aranea's life/death, giving her one dead eye and one living eye, split by the shadows. The ring itself is incorporated into her seven pupils, and the circular overlays.