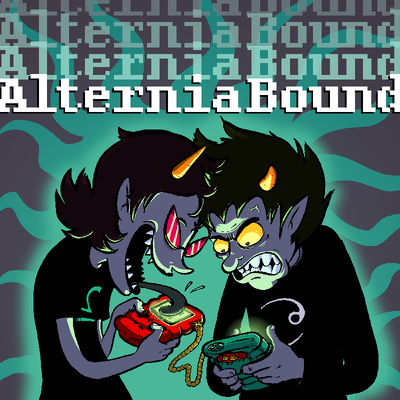 Bad news for everyone.

This album is not here to explode your pants off. This album is not one that is going to give you a hemmorage from headbanging too much. If you want hard-rocking, excellently mastered, brainkilling tracks, look no further than Tensei's Strife! album. It should wet your whistle for heavy metal, and possibly any other multitude of wind instruments you present to its sweaty, testosterone-laden spray.

This album is for a special group of people. The people that open the AlterniaBound flashes in one tab and then leave them on repeat, just so they can listen to Horschestra 4000 times. These are the people that complained incessantly when Eridan's theme wasn't on an album, even though it hadn't even existed in the comic yet. Some of these people have named their children after MSPA characters.

You terrible, wonderful people. This album is your fault.

Now go forth and enjoy: Not in MP3, but in WAV; not in OGG, but in FLAC. The nostalgia-rich AlterniaBound tracks you all sought so dearly have been padded out by new experiences, forged from feverish hearths by several of our greatest musical madmen in order to breathe new life into a setlist you saw long coming. The bonus tracks have been tweaked, the equalizers have been set, and the fans, the fans are stoked like the blazes these beats were born hence. Hopefully you will find the tracks carved out from these sick fires to be... sufficiently ill.

Now! Let it begin, young ones. Just keep in mind:

Once you pop, the games don't stop.

Oh, and the games.

as with Homestuck Vol. 5, track art for Alternia and AlterniaBound is from the Alternia/Bound track art anthology projects! original track arts, which were largely (though not entirely) just crops of panels from the webcomic, have been left in the commentary for each track.