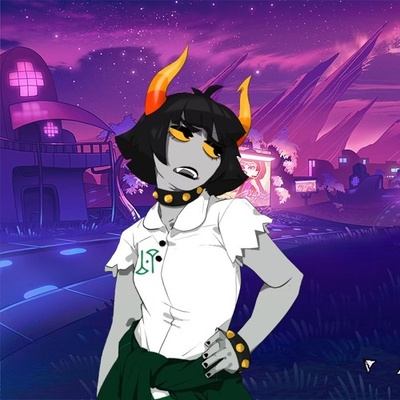 (this title was too long)

Tracks that reference (this title was too long):

Flashes & games that feature (this title was too long):

▲trollkind cannot gain anything without first giving something in return. to obtain something of equal value must be lost. that is alchemys first law of equivalent exchange. in those days, we really believed that to be the worlds one, and only, truth.▼

i wrote the original track when i was a teenager in a shitty band called "the isotopes" which is a reference to the baseball team on the simpsons. yikes. i played drums. bigger yikes. i fixed it up for this because we... just didn't have anything that fit. the idea is that its.. a jade blood who is trying very hard not to be one.

you still have all the trappings of jade blood music: piano, bells, harps, arpeggios, some sort of.. ethereal moments.. but its like this weird bad rockabilly nonsense. you can hear how a like 11 year old me wrote what i considered to be "stride piano" there was a point this was gonna be a grubbles song but its like... well theres only two of them. so i kinda went buckwild on the drums a bit. remember dammek? i wonder what that guys up to. probably some stupid shit LMAO.

anyway a lot of you are wondering why trace put fucking lapras in the preview image and i guess the burden falls upon me to explain. on twitter there is an artist who predicted every single time it was gonna be daraya whether they had evidence or not and theres a whole like in-joke comic about daraya bringing a lapras plush (named SLAPRAS) to jade blood show and tell... look man i dont make this shit up theres a lot of lore. if you arent on homestuck twitter its about a thousand times better than anywhere else for that sort of... golden-age-homestuck fandom feel. nothing will ever come close to that but this feels very nostalgic to just joke and laugh with friends and shit. you guys have been really good to me. thanks.