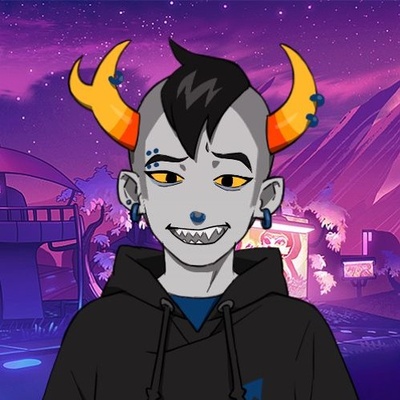 theres a channel that just re-uploads homestuck/hiveswap and now friendsim music to youtube so i named the track this so that a lot of confused kids show up in the comments. there isnt really anything i can do about people re-uploading music (and if it brings in a few more sales, then hell yeah) since if you take one down 9 others pop up and then people call you an asshole On-Line. at least we can both have a bit of a laugh when like fragman22 shows up in the comment section calling this song and whoever "james roach" is gay. well you got me there, kid. i am. i am gay.

for this one i really wanted to capture that LAD atmosphere. idk if mallek is a lad exactly... but he's got lad energy. maybe im just projecting. I have been saying saying "boyo" a lot lately. oh god is the lad.... me??? no probably not.

this song started off as a track for my best friend at the time Lexxy's fantroll very creatively named "Lexxer" back before homestuck fantrolls were "post-ironic" and still "sincere." I also put the melody to "nuclear" in here as a throwback to my old fantroll "Carcha." I have said fantroll more times today than I have in the last year. Fantroll.

this is the closest to ska that friendsim has got just because in its original iteration this is a weird like... electronica ska song.

anyway i say it "started off" as that but i literally wrote this track on like.. monday. thats how ya boy do. I borrowed from a song i wrote for a fantroll album i did. theres a whole fantroll album that... hasn't really stood up to the passing of time so I've mostly purged it from existence. I guess some chuckleheads found it but have been kind enough not to repost it.