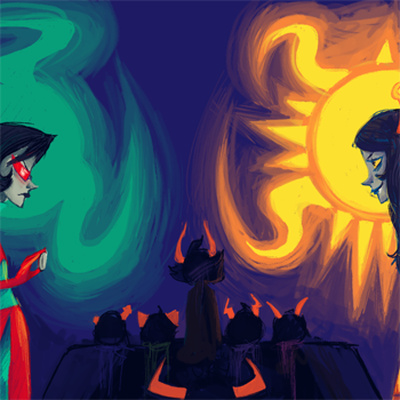 Tracks that Trial and Execution references:

Not a huge amount to say on this one... The scene inspiring it was obviously Terezi's ancestor Redglare vs Vriska's ancestor Mindfang during the sort of mock-trial that ended in Mindfang mind-controlling the crowd and hanging Redglare. Felt like a nice scene to try some musical accompaniment, so I did.

So a combination of liking Terezi's theme and getting my hands on some new samples and voices, I decided to whip this together. The idea was a very tribal, savage kind of military march (and chanting) to represent the lower class masses baying for blood. It starts off using Lemonsnout Turnabout for Terezi, but then quickly changes to Crystalanthemums -- Specifically for the reference to "Make Her Pay" and Crystamanthequins as a kind of "Vriska vs Somebody" theme. Ideally it would've just evolved into Vriska's theme, but I find that one a bit tricky to work with.

Finally it throws in a string glissando as tension mounts, and then snap! Dead! (The snapping is some kind of double bass string snap.)

The little eerie female vocalist thing didn't really work and is a bit cliched, but I kinda like the rest of the track. Always nice to give character deaths a little celebration

The name's fairly obvious - I was trying to work in some kind of "Trial and Error" gag but I guess this works.