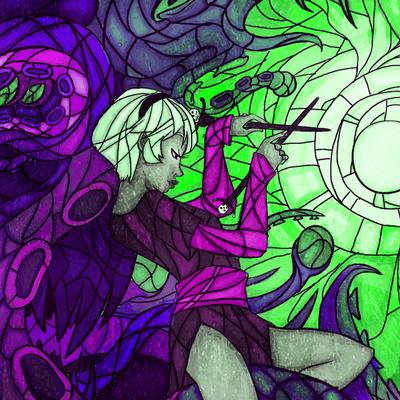 So it's the music forum discussion, and there's talk about albums representing each of the kids and discussions on what the styles would be. Some are obvious (like say, Dave) and some are offering a bit more discussion. It comes to Rose and there's a degree of uncertainty, and I suggest that it'd be veering into classical, offering up Saint-Saëns "Dance Macabre" as an example of the sort of thing I'd expect, and then set out to whip something up.

And at this point in the story Rose's set on flying her dream self with the tumor into the green sun to destroy it (Ah remember those days). In a tried and true effort of "trying to predict where Hussie will take the story and make music for it" BR/GS was scribed as a "very sad, yet hopeful, song about Rose's eventual sacrifice" - Hence why it all builds up to a big creshendo and then fades away (and why it's called Black Rose / Green Sun , although there's another reason for that as explained below)

The whole thing is based on yet another piece I made years ago and drafted it out of retirement and made it into something new and useful. The music box was one of the key elements, representing a kind of creepy childlike innocence, and then Rose's signature instrument (the violin, although the sample used is actually a viola and the notes it plays are closer to a cello) begins to kind of build up. Eventually we see the majesty of the green sun, and the rest of the song builds up to the tumors destruction. (All of which never happened even remotely in this way but that's what the song was supposed to be about anyway). The overall style is a kind of very sinister attempt at representing something small vs something huge - Original inspiration was taken from the style of music from Xenogears (Yasunori Mitsuda, being very celtic and awesome).

The scratchy-sfx were my attempt at auralising the green sun's "scratch" effect. I'm not 100% convinced they work but Andrew kept 'em in so whatever.

When Andrew asked to use it, it was going to be for a walkaround, so I needed to make some adjustments to make it loopable for the flash. For the album, I added a second section with a keytar solo (I was mucking about with it at the time) to make it a bit more interesting. Ultimatly it ended up being used for something completely different than originally intended, and oddly the name ("Black Rose") became oddly apt once she went all grimdark and tried to fight Jack ("Green Sun").

The name was also a reference to a Sonata Arctica song, similarly titled involving colours, except it was called "White Pearl, Black Oceans".