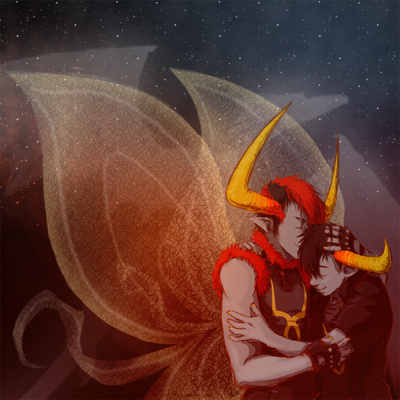 This track is one I sure as hell put a ton of effort into, as it was my big chance to finally do something with my music. I was at a pretty good time of my life and I was able to work on this thing day in and day out, and so I did, but first I put a lot of though into what I wanted to actually do. I’m a bit of a contrarian when it comes to making music, always trying to figure out what everyone else does so that I could do something different, and so I wanted to make a theme for Tavros that looked at his character from a more serious perspective about what he was and what he wanted to do. It’s original title, “If I were like Rufio,” reflected the melancholy desire to be something or be in a world where he was great, where he was a hero but in reality he couldn’t really amount to much, and it was his own fault.

For the style of the song I ended up falling back on one of my main styles, which I called “orchestral cinematic/game with a hint of latin rhythms and harmonies.” I don’t really know what it might actually be called. Unfortunately, while this made the song accomplish what I wanted it to, it can be a bit hard to listen to at times, for being too dependent on situation and scenery.

However I’m very proud of it! I got to practice a lot of new and old things and combine them into what’s currently my longest song! Well, longest I’m not ashamed of. It ended up being allocated to the Summoner, and I had a feeling it would. I’d say close enough, but it feels a bit weird to say that! I wouldn’t change much about it, but I think it’s a bit bland, and I’ve learned a lot from that.