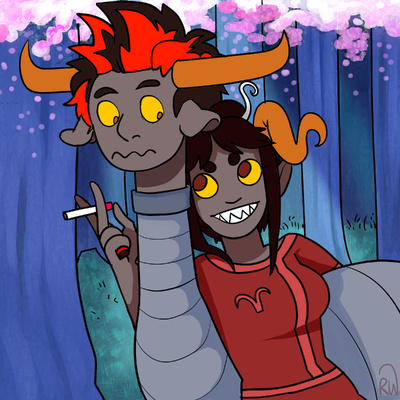 I thought of how I would direct the track on my way to the shop actually. I ws listening to coloUrs and mayhem and I was just like "these would work well together." The beginning of the track is how the "accident" (read: damara's insatiable fury) happened, going on to Horuss and Rufioh building a relationship as he worked on the latter's body, which devolved into Rufioh's eternal, depressing grind through a mundane life, dating a guy he lost admiration for after the initial spark faded.

The idea for this drawing was that I just really wanted to draw Damara and Rufioh meeting up after his head's been placed ona robot horse. Nothing much really! I've always had a soft spot for Megidos so adding her in was absolutely necessary.