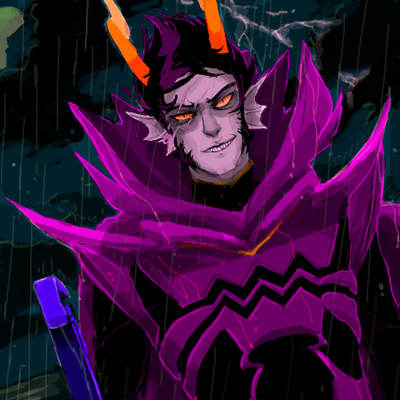 Violet Mariner was the first song I started working on for the Homestuck music contest that eventually became the coloUrs and mayhem dual album. It’s a song about Dualscar—but it wasn’t always a song about Dualscar. No, it started out as a song about John. This explains the harp/piano section, which plays with the opening melody to Showtime, vaguely darting near it without ever actually producing the exact notes from Malcolm Brown’s original song. I intended it to be more of a hint of John’s original strife theme than a direct reference. In hindsight, keeping the references to existing Homestuck leitmotifs subtle was a smart idea. If I’d been more overt in my references and just made it a straight-up Doctor remix or an explicit arrangement of Showtime, it would have been really hard to reallocate it to a different character. And I’m happy that Violet Mariner is a Dualscar song. Dualscar needs more songs. And also it gave Radiation an excuse to almost name it “Violet Seaman”. And besides, it means I still technically haven’t used the original title, Heirstrike, yet.