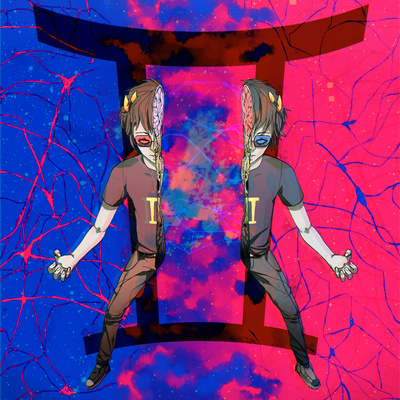 Yes, I'm still amused by the fact that the comments on the most popular YouTube upload of this song essentially consist of nothing but "THIS REMINDS ME OF X GAME".

And not one of them has ever guessed Baten Kaitos, which provided the primary sources of inspiration for this track (the two Chaotic Dance songs: link - link). Absolute madness.

So. Gold Mage. Originally known as "Playtime is Over" and written for Dirk Strider before being repurposed to Sollux. Probably my most successful song, before I wrote that remix of Amalgum from Undertale. The very first piece of music I ever made money on.

I shan't lie; I'm not as fond of this song as I used to be. Not because of the Homestuck connection or anything; simply because it's just too repettitive. Enough so that it lead to why the eventual remix of it turned out the way it did (too busy and cluttered in places - Gold Mage [Playtime Is Over Mix]) It was so with purpose; I did intend for lyrics to go over this- I even wrote a few- but never recorded anything. But honestly, I can't quite bring myself to hate it. The chords are quite nice, what melodies there are + the basslines are pretty slick, and it was my first major musical success. Though the royalties have since slowed way, way down- it's like £10 every four months, if that- it was a major deal when it first dropped as a part of coloUrs & mayhem: Universe A. Even Toby Fox and (assuming I'm not misremembering entirely) Andrew Hussie had nice things to say about it- directly comarping it to EarthBound-type stuff and being astounded it was written, from the ground up, in a PS1 game.

I may not be much into Homestuck these days, and I definitely think the song is showing it's age... but, hell, it's special to me all the same. One of the most integral pieces of my early music career by a wide margin.