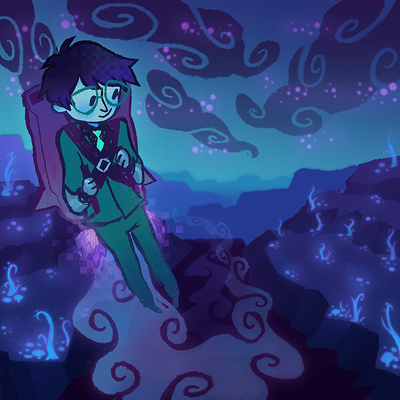 This is definitely one of the older tracks on the record, a cover of Penumbra Phantasm by Toby Fox aka Radiation. At the time of writing this, that track still hasn't been released, but that didn't stop me from making a cover of it. And then re-making that cover, since the first one was kind of crap.

Not really a whole lot of deep thought or anything with this, I just thought the melody sounded cool and it could work for a sort of high-energy swooping-around sort of thing. And then later, I associated it with John's jetpack flight after he gets warned off from dying to his planet's Denizen, so that's what it became.

On a completely random note this piece always makes me want to go out running, and I have done so to this piece a few times. If I could do flips and parkour and stuff I'd totally be doing that too cause it works really well. Maybe gunfights too. Alright let's move on to the next piece.