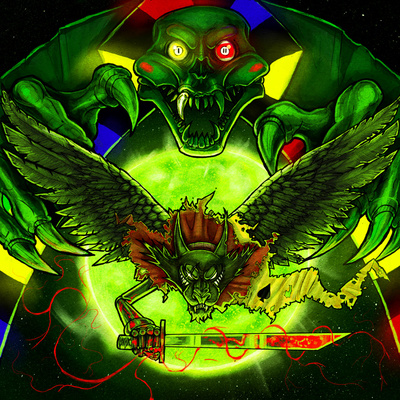 And now that everyone is prepared....it's time for the final fight.

This track, like the album, was perhaps a bit ambitious to try, a final boss fight with the biggest baddest dudes around, but I made it anyway. It pulls from Showtime, the original strife music, and also (ironically enough) from an idea I had when I was around 11 and wanted to make something spooky for Halloween. Let me tell you, it worked way better in this context than my original plan.

So seeing as this is the final boss fight, there wasn't really any reason to hold back while adding in instruments and layers. To this day, it's definitely the largest piece I've made in instrumentation, and also the first to make me render everything out into separate files because my computer just couldn't handle it. Suffice to say, it's a pretty large piece, for a pretty large fight. There's a rather intentional and large nod to the aesthetic in Rex Duodecim Angelus by Malcolm Brown as well, since his piece was about the trolls' final fight with the Black King at the end of their session.

And at the end, there's a little victory music to pass through and segue into the last piece...