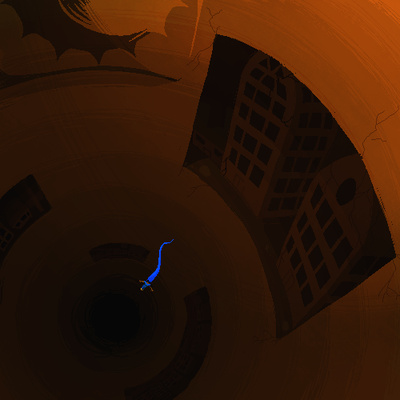 The descent into Skaia and the exploration of its interior, I feel, went by too quick. It might just be because the Tomb Raider series was a favorite while growing up, but I've always loved old, unexplored ruins, arcane or mystical elements hinted at with wall carvings or murals, that sort of thing. And Skaia, being the center of a sort of central planet to everything in Sburb, could be chock-full of old buildings and mystical secrets to explore.

So, to try and accompany the general air of mystery and exploration that would have gone with a long journey into the center of Skaia, I took an old idea in Locrian mode. If you're a music person, Locrian is when you take a major scale, but start it on the last note. It's a rather off-kilter scale, and it can't ever really resolve to the tonic chord like most other scales can, which made it rather suited to a piece about the sort of strange secrets and landscapes that could be hidden in the center of Skaia.