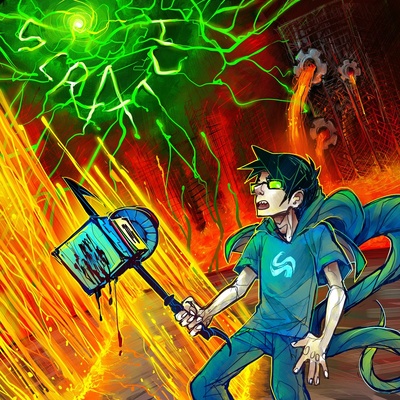 Aka "the big reset button for the universe". It was hinted at for ages in the comic, and finally happened at some point after this piece was made. It also served as the inspiration for a project that my third-year piano studio did.

In the comic, this event was basically a way to reset the universe, everything inside it, and recreate it in a different way, one that would make the game winnable. So, in my head, a mass de-compilation of everything, like a massive maelstrom building as bits of data are pulled apart. A black hole, in other words, but arcing out in waves of energy ilke lightning. Mother Nature ain't got crap on this beast.

The piece started out as extreme laziness on my aprt, just idle playing around with various distortion on synths and samples, until the school project came up and wanted results fast. So I threw some things together until they formed the opening, and took a very lax approach to the piano part, a sort of "here's a riff, now play around with it, there's your part" with a drum loop over top. Thankfully my laziness didn't extend to the whole thing, and it all got more polished up and developed over time. It still keeps the "improvised piano part based off one riff" idea, though.