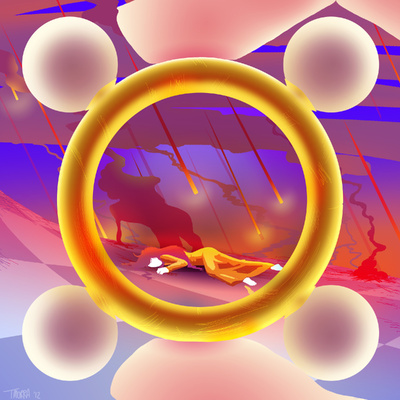 The first of two completely-solo-piano pieces on here, this piece was a small idea that I had one night, that I sat on and worked into a rough piece right then and there even though I was supposed to be recording parts of the Sburb album at the time. And a little later, I was fortunate enough to get a good recording of it before heading home for the summer.

The piece itself is meant to go along with John discovering Jade's dead dreamself, after waking up on Skaia for the first time. I know a lot of people associate Sarabande, from Volume 5, with that event, or at least with John reading Jade's letter, but I couldn't help but want to at least touch on it while going through his timeline. Originally I'd stuck this before John even entered the Medium, but that didn't really have any moment tacked on with it, and it made much more sense here.