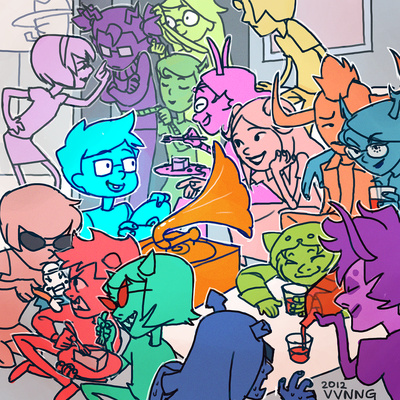 This is the second of the solo piano pieces on this album, at least in the main tracks, and a really late release as well, given that it first appeared in the comic some time around a year ago. I've held it back from getting released just so it could go on this record, so I'm glad it could finally go out.

This is also the only piece on the album that doesn't have a specific event to go along with it. Instead, I went for where it appeared in the comic when placing it, and see it as more of a small interlude. The intermission between Act 1 and Act 2 of a musical, if you will. The art is meant to go along with this as well, a sort of non-canon get-together of the first set of trolls and kids we know, and I can imagine them playing this record while they chill.