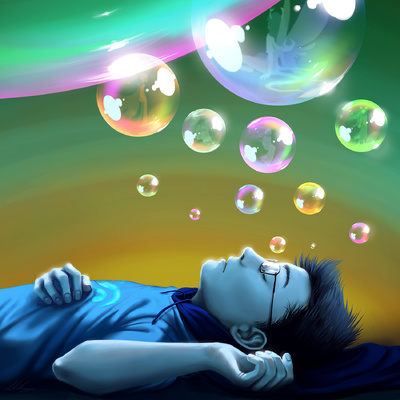 To separate the big glitched-up waves from the final battle and rest up ahead, I wanted to stick something right in the middle just to give the listener a break. And, in some games I've played, there's a sort of resting area before the final boss, or a small break to prepare yourself before the last battle. This is what spawned Respit, the idea of a light and airy, calming piece. I was also pretty reminded of Kingdom Heart's usage of the "resting area" trope, which was a small chamber with several large crystals around. So, I went with the idea of a large, reflective area, someplace in the dream bubbles perhaps, where the heroes could rest and reflect.

This is another one of those tracks, too, that tried to predict a future event but was overtaken as time went on. The concept of the dream bubbles and the long voyage John took fit my original idea well enough, though, so that's what the piece molded itself into being.