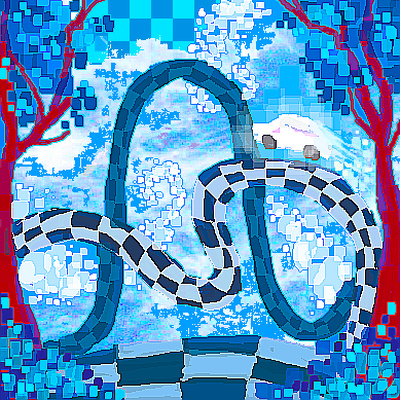 A little later, and John's achieved God Tier (near-invincibility) and is blasting around Skaia (central planet hub) with one of the game pieces (who was later called the Wayward Vagabond but is equivalent to a pawn in chess), using his powers to make a car (he took from his dad's wallet) fly around.

That's kind of a confusing explanation, I'm sure! Basically all you need to know is that there's a car that can fly and it's flying. Like pchooo flying. It's awesome.

For the piece, I went with this old idea I had a few years back in college, a 13/8 double-piano piece. Seeing as I'm not two piano players, though, I wanted to orchestrate it out a bit, so I put some brighter instruments to double the melody, over top of the original riff, and beefed it up with some light strings and drums. A few other instruments come in later as the piece developed, but like October, I tried to keep it all to a small group and not let the orchestration explode.