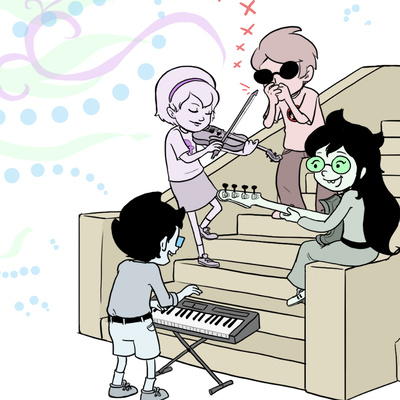 Now to completely break away from the previous track, we move into a peppy, small ensemble piece. This one just started out because I wanted a tight ensemble to play something together, something sort of bouncy and light. Before that, I'd been making a lot of pieces that felt unnecessarily large, sticking in instruments for just one little section and not using them the rest of the time, so something lighter with more emphasis on individual parts seemed like a great idea. I had no idea what to call it, though, and it didn't really seem to have much context in terms of the album either, until I was looking through the 2010 calendar that the art team made, and came across the October artwork. Immediately it was like, that was it, the piece both fit the "kids and fun" aesthetic that lasted a while in the beginning, and the artwork fit too, so it achieved purpose and title both at the same time.

Instrumentally it fit too, it had piano and bass and bitcrushed drums that sounded somewhat like beatboxing, which were three out of the four instruments the original kids used. There's definitely a discrepancy with using synth vs. violin, though. Before anyone asks, I definitely spent time trying to fandangle string patches into it, but it just didn't work. So you can imagine Rose playing an electric violin, that's what I do. (I don't know if electric violins can function like that string players please don't strangle me thank you)