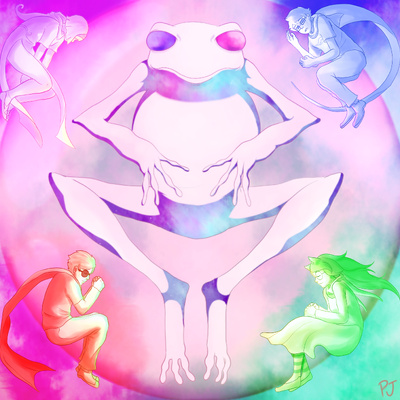 In vento cogitatio, spiritus in vento

When I first auditioned for the Homestuck music team back in 2009, one of my two audition pieces was Pumpkin Cravings, which ended upon the "Homestuck Vol. 5" album of the following year (and was subsequently orchestrated by the illustrious Alex Rosetti into THIS Pumpkin on THIS Album). The other piece was a short electronic-sounding demo entitled "Skaia Voyages" that I based on the Sburban Jungle and Skies of Skaia themes, inspired by the purposefully vague notion of the Kids' "ascension" recently introduced in the comic at that time. The demo never ended up going anywhere in that form, but its musical ideas stuck in my head, growing and evolving in my mindscape over the years into something much grander than what I had originally envisioned. It grew additional references to Revelawesome and the Kids' themes, grew a full orchestra, grew a massive choir and epic sci-fi noises of indeterminate nature...

And then - eventually - it became REAL.

(yes it was totally that easy.
no you can't stop me from pretending this.)

WOW 7 years of Homestuck. I only hopped on this hectic bandwagon in 2011, but it was definitely worth it. I NEVER would have expected to be able to contribute to and take part in Homestuck itself. This is like a dream come true. THAT BEING SAID: CREATA!

Creata was heard in short (Creata (Canon Edit)) during the first part of Collide, so being able to listen to the full version of the song and then DRAW for it was pretty cathartic (i might have cried). When drawing for Creata, I wanted to capture the "essence of creation" and highlight the greater purpose of the Beta kids in the creation of their universe. The piece is long and explosive, much like one would expect the creation of an entire universe to be. I wanted to depict a climactic moment, something grandiose and defining that fits in with the end of Homestuck properly. What better event than the Genesis Frog finally blooming with the original quartet?

(i definitely did cry)