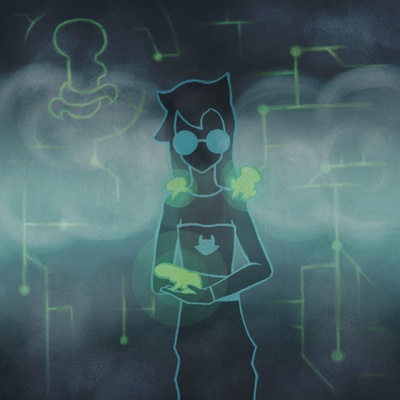 We started this song back in January 2012, during one of our regular hanging-out-probably-drinking collaborative sessions. We got talking about the fact that Frost had been remixed a couple times (once by us, and the other by orngje223). One of us (probably Nick) wondered what Frost would sound like as a really cliched remix, to which Jeremy sarcastically pointed out that the only people who ever remix Frost is himself and his friends. This idea was, obviously, a total joke; nevertheless, we kept at it. The song ended up getting to a point where we realized the joke had been lost, and something awesome took its place. To put it simply, what started out as us dicking around ended up becoming one of the coolest songs we've done together.

Doing art for a dance remix of Frost wouldn't have proved tricky if not for a perplexing (but very cool) track title. And so, here we have Jade and some frogs integrated as part of a... metaphoric-circuitboard-type-thing by Echidna. I think if you imagine the song set to a trippy frog-gathering montage on LOFAF with this imagery, you'll get a better idea of what I was aiming for. At any rate, I'm really happy with how it turned out, and I hope I've done the track the justice it absolutely deserves.