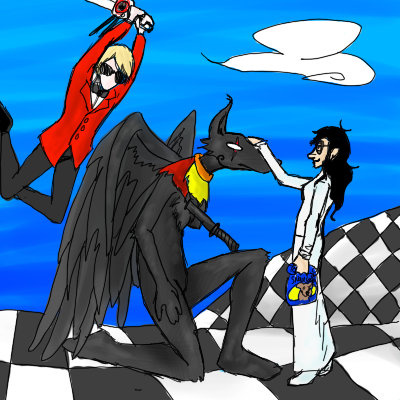 This is a commentary! Just saying this in case you accidentally clicked on this pdf and got lost.

But anyway, I guess I should talk about my track 'Jackie Treats'. The initial creation, or rather, remixing, of this track started - as far as I can remember - when I began messing around with one of the melodies from Liquid Negrocity, which is probably one of my favourite pieces off the Midnight Crew album.

I created quite a neat little piano piece, which is heard at around 0:59 to 1:10. This is pretty much what helped me get into a rhythm for the song, and before I kenw it I began composing around it. It was probably towards the very end of the song, when I added the jazz organ into the piece that made me think of 'Bec Noir' having horrible thoughts concerning dog treats. So I decided to name the WIP track 'Jackie Treats' (The name kinda stuck).

Lastly, I needed to improve the intro. It was bad or something. So I decided to mix in Frost to help create a little symbolism here and there about BN and Jade's relationship.

I drew the picture this way because the track was inspired by the Snausages page where Bec feels love towards Jade. In this piece he's putting his trust in Jade as she is holding said treats, meanwhile Dave is sneaking up behind him for an attack.