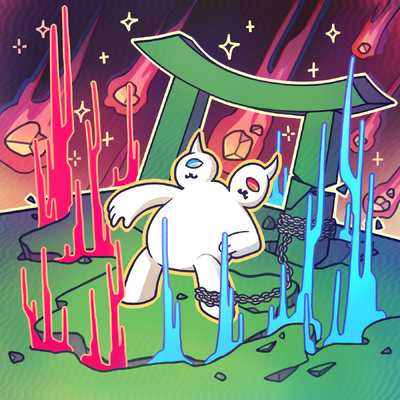 For those who may be curious, the title (suggested by Lambda) is play on the term "Polyphemus" which refers to the cyclops in The Odyssey. It's a really dumb pun, and I love it.

Polypolyphemus is an intense track, so it's fitting for its art to capture the same intensity. Sollux's Biclops is captured right before its imminent demise as the troll's Mind Honey-induced flip out rips through the ceiling of his hive and surrounds the lusus in a multi-colored beam of energy. The meteors illuminating the night sky further illustrate the carnage present in the scene in a fashion that pops up time and time again in Homestuck proper. If only one of those meteors could break the chain around the Biclops' leg and set it free! Wait, the resulting impact would probably just kill the Biclops anyway. Never mind, that was a stupid idea.