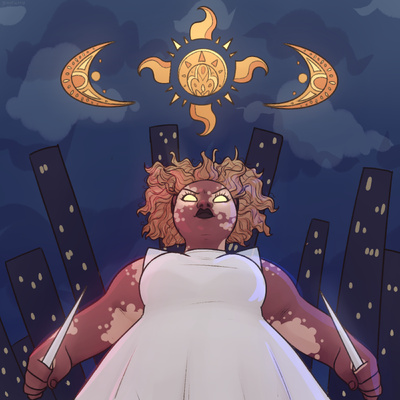 Tracks that The Light's Rebellion references:

Greatly inspired by the soundtracks of Touhou, PMMM, and various Japanese media, The Light's Rebellion is meant to sound like the overture of an epic and tumultous tale. To me, the life of Roxy's illustrious and erudite Mom - encompassing the publication of doorstepper novels, a Guy Fieri rodeo down a waterfall of blood, and death as a revolutionary at the hands of an alien empress - is the sort of capricious novel-worthy story that can only be told through battling melodies in the major pentatonic scale, 3/4 + 6/8 cross-rhythms, and soaring trumpets.

The primary melodic motif opens the piece on the solo violin - a rousing tune representing the character of Alpha Rose and her rebellious aspirations. The trumpet then introduces the secondary motif - that of The Thirteenth Hour, a melodic backbone representing (erroneously?*) the novels to which she devoted the greater part of her life. It rises and dips, shifting between lyrical solos, brassy full-orchestra segments, and percussive interludes. Two of Rose's motifs, Aggrieve and Endless Climb, are also briefly quoted.

In all, creating The Light's Rebellion was a joy and a challenge, and possibly the first and last track of its style that I'll ever do.

*The video from which I'd heard The Thirteenth Hour featured the cover of Complacency of the Learned, leading me to associate the track with Calmasis and CotL. In retrospect it was probably more about Calliope's Calmasis-like trollsona (i.e. the thirteenth "troll") than Calmasis, but here we are. (Calliope is named for the muse of epics, Mom wrote epics, it works...)

Her hair is like the sun, rebelling against the oppressive shadow of the night sky.

Not complacent, but sure as hell learned enough to punt you down a waterfall with stabby needles.