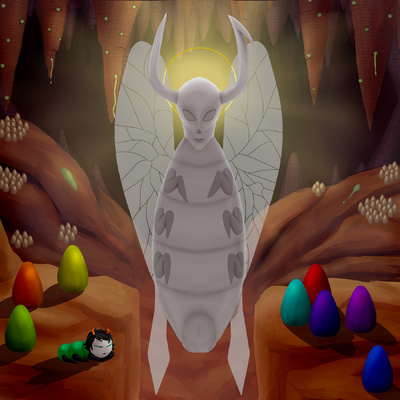 Oh man, this is a really loaded song for me. Coming from a musical background that mostly consisted of writing punk songs and making bad beats, when I started on this I sort of had no idea what I was doing?? I wanted to portray this sense of grief and sadness that would shift into a big, fun declaration of hope and all that, but really what wound up happening was me rushing through the grief and sadness to get to the fun bits with the electric guitar. I even made the fun bits with some friends watching just to make sure that it truly was both big and fun! That was the good part, in my eyes. Unfortunately, I just didn't know how to properly convey the feeling I was going for, and I really didn't know how to write a song for a character. I wasn't experienced enough and I didn't have the tenacity to stick with it. That was the first version of the song I ever made.

That's when my dog Beethoven died. He was 15 years old, but I'd only had him for 6 of those years. He was honestly one of the sweetest dogs anyone could ask for. He was intensely loyal, loved to get loved on, and would always come back no matter how far off he ran or how deep into the woods he got. He was one of my best friends, and having this happen to me was a very large shock to my system. I'd been fortunate enough up to that point not to have any close family or friends pass on me, but Beethoven was very close family and a good boy in general. It was my first time having to grapple with the overwhelming feeling of grief that comes with the loss of a loved one, even if that loved one was a dog, and I was struggling with it. I was down and out for a while. If it had been me from a few years ago, I probably would've just laid in the dark and grieved for a long time instead of doing anything useful or trying to get over it.

Instead of just letting myself wallow in it though, I decided to push most of those feelings into this song. I don't really get too cerebral when I work on music; most of the time I just make sure it sounds good and then I move on. With this song, though, I specifically wrote the middle portion with this smothering feeling I had weighing on me in the forefront of my mind. It was a really therapeutic experience for me and I think it reflects in the music. The portion before the guitar comes in has wonder woven into it, but it's also heavy feeling. It being so sparse contributes to this darker feeling which makes the brighter section feel more fun, whimsical, and most importantly, hopeful.

All in all, this was an interesting thing that I learned a lot making. It was my first time receiving real criticism on something I made and I hope people enjoy it!

The Mothergrub has always been a fascinating creature to me in Homestuck, both as a part of reproduction and as a lusus. Especially since becoming a lusus means that you give up a life in the brooding caverns for a shortened existence to care for onechild. And with the Virgin Mother Grub drawing so many parallels to the iconic Holy Virgin Mary, I decided to draw my own parallels. I wanted this peice to be symbolic in nature towards the ideas and standards of the Mothergrub. It also may be a little sacrilegious in regards to the Catholic images of the Virgin Mary, but we'll just ignore that little fact. The Virgin Mothergrub floats with the brooding caverns behind her, and her new charge sleeping peacefully nearby, alongside other eggs nearly ready to hatch into trolls that will play a game and sacrifice to create something new. (we're also going to ignore the fact that i may have had an out-of-body experience while working on this piece)