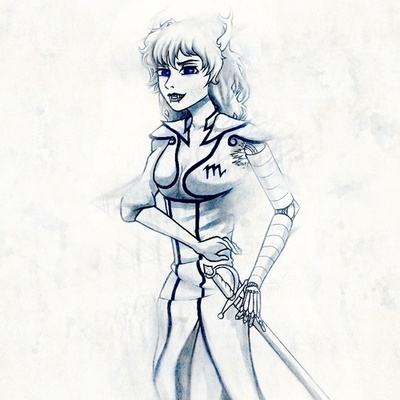 0:00-0:14: An unassuming troll merchant ship sails the ocean, its precious cargo of shitty romantic comedy movies tucked safely within its lower decks, unaware of the danger that approaches.

0:14-0:24: A pirate ship suddenly appears from out of the fog, closing in fast! Its captain: the dastardly pirate Marquise Spinneret Mindfang!

0:24-1:05: Mindfang's pirate crew boards the vessel, and a battle ensues! This part introduces the main theme of the piece, which is adapted from the first thirty esconds or so of Imbrog's Cobalt Corsair. As the fight continues, another ship closes in...

1:05-1:19: It's Dualscar! He and Mindfang cross swords once again. This section lifts the main melody from my own Violet Mariner.

1:19-2:04: It's time to get all Hans Zimmer up in this bitch. Mindfang and Dualscar duel amid the cacophony. There's a whole bunch of Errol Flynn swordplay and shit. Masts get climbed and sails get torn and stuff like that. Fun for the whole family!

2:04-2:58: The chaos awakens a beast from the depths of the sea, which begins to ravenously devour the hapless cargo vessel. The battle continues even as the foul kraken crams the ship down its toothy gullet. Mindfang and Dualscar swordfight their way onto the deck of Mindfang's ship as the beast, satisfied, sinks back beneath the waves. There's a little bit more from Cobalt Corsair in here.

2:58-3:53: Thrust, parry, dodge, that kind of stuff. What remains of Mindfang's crew knows it's best to stay out of their way. Meanwhile, a round of decisive cannon fire takes its toll on Dualscar's ship.

3:53-4:00: Dualscar and Mindfang's blades both end up precariously close to each other's throats.

4:00-4:13: One jump cut later, Dualscar is left adrift in a lifeboat as Mindfang's ship, a little worse for the wear, vanishes into the void.

Oh look, it appears I've done yet another track art for Ascenzo. I'm kind of like Will's artist stalker.