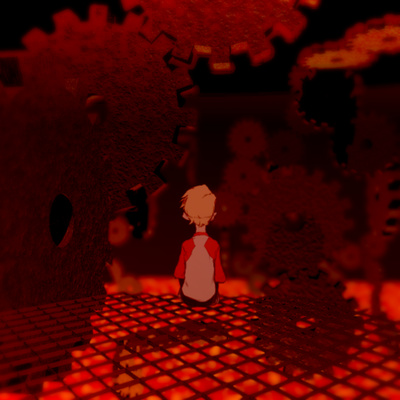 Throughout the last year I’ve been more active on Skype with fellow Homestuck readers and contributors, especially since February when I was added to the (in?)famous Stupid O’ Clock chat. What I found out from a lot of them was that quite a lot more people enjoyed my first ever Homestuck track than I expected. Candles and Clockwork was actually pretty popular and multiple people came to me at different times saying I should work on it again with the better programs and talents I’ve acquired since.

The outcome was the remake I posted on my Tumblr a few days before the album came out. I posted this in the Volume 9 thread we had, and Albatross Soup offered to work on the track. The outcome is this final version of Candles and Clockwork!

I put a whole lot of subtle nuances into this piece. The biggest one being something that occurs throughout the piece and in almost every track of Sburb: hemiolas. For non-music folk, a hemiola is when a rhythm does not fit into the measure of music it is in. They are very similar and often function as polyrhythms, another favorite tactic of mine. In this track specifically, you can notice that the piano ostinato is clearly in 4/4. The clarinet and harp however, are in 3/4. Because of this, these lines only ever match up ever three measures for the piano and every four measures for the other instruments. Since the phrases don’t fit that pattern either, the actual lines never quite sync back up and repeat themselves. The melody line above it is for the most part in 4/4 but kind of sways the line between the two time signatures. This is also how I was able to adapt the melody into straight 3/4 for Chronicles (from Sburb) since that version does not have the 4/4 ostinato until the second section!

For this version, Albatross reorchestrated the parts and added his own distinct flare to the piece. The original version had a dulcimer and harp generating the two ostinati in an attempt to generate a similar feel to the Kingdom of Zeal theme Corridors of Time from the video game Chrono Trigger. The remake I made changed the dulcimer for a harpsichord to change up the timbre slightly. The biggest change was moving the melodies first instance to cello. Albatross took this concept and took it further! The harpsichord became a piano line reminiscent of Chronicles and Candles and Merry Gentlemen (a bonus track from the Holiday album). The harp stays, but the lower voice doubling the part now became a clarinet. A flute is added at the vocal breakdown midway through the piece and then takes over the cello for the recap of the main melody! The ending also became a general diminuendo much like the original! I absolutely adore his take on the song.

The original song was written at first in an attempt to go along with Doctor and Endless Climb as a calm and atmospheric song aimed at being a land theme for Dave. At the time we knew him as a knight and WV’s painting showed his planet with a large gear and fire. I figured from this that his land would involve something knightly/fire based and something involving gears. From that I guessed it’d be the Land of Candles and Clockwork. Little did I know that Andrew was going to break the chain and pick a vastly different song with Atomyk Ebonpyre.

Ever since I’ve considered the song to be a Strider anthem. Dave and Dirk have a whole lot of songs about them, but all of them are either derivatives of his instrument (inspiring hip hop beats etc) or just really intense. They both are actually really chill and collected for the most part, so I liked the idea of them having a calm song.

As for this name in particular, it should be obvious that it’s the post scratch version of the song (so aimed more at Dirk and Alpha Dave). The working title was also Candles and Clockwork (with the a’s replaced with lower case alpha symbols). Sadly, it doesn’t really differentiate itself from the original. The symbols aren’t separate enough to make it easy to tell the two versions apart.

The art was done by the fantastic Worthikids who I only just recently discovered! They actually made it a while ago for the original Volume 5 version. I messaged them about using it for this version. Go check them out!