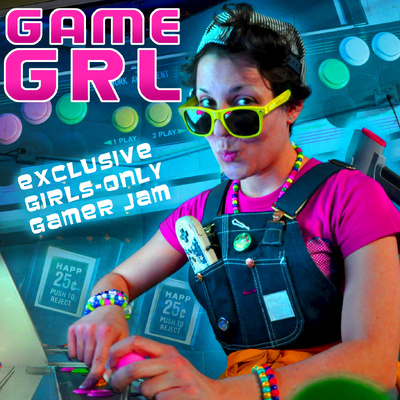 Aw yeah! What's up gamers?
I'm GameGrl, and I'm here to show you that girls can game too!
Don't go easy on me, guys - unless you want to get beat by a GIRL.
Are you ready? Let's DO THIS.

Yo I'm the GameGrl, and I've got the scores
'Cause I woop butt and game hardcore
I might look cute but I play to win
So get your head in the game, 'cause we're about to begin

I got sweet moves and secret skills
To pull off the codes, the combos, and kills
Tapping my fingers like a maniac
This girl's gone bad on a game attack!

Let's have a dance party RIGHT NOW. Everybody do the wave! Yeah, that's pretty good. Check it out! I'm dancing! I'm dancing! Check this move out! Oh man, oh yeah!

Aw yeah. I'm having SO MUCH FUN. This is like a slumber party where there's nothing to do but play games ALL NIGHT LONG. Oh yeah, and NO BOYS ALLOWED. Not that I CARE - I can beat any boy at any game, any time, anywhere!

Awesome! That was totally rad to the max! I could just keep doing this all day... NOT! I've got games to play, and if you think I'm gonna slow down just to talk to a bunch of amateurs, then you need to seriously blow the dust out of your cartridges.

But hey, girls, whenever you need to show those creepy boys who's boss, just remember that GameGrl's got your back. Look for me on specially-marked boxes of Betty Crocker brand snacks and have an adult call the toll-free number to subscribe to the exclusive girls-only GameGrl Magazine. Alright, check you later girlfriends!

Originally we’d planned on doing a Homestuck album that was devoted entirely to the Sburb Alpha kids and their session, all of us doing tracks that would parallel earlier tracks in a same-but-different fashion. While this album became Homestuck Vol. 9, a lot of analogous tracks remained from the original concept, including this track as an alternative to “GameBro (Original 1990 Mix)” from Homestuck Vol. 6: Heir Transparent.

While we can only imagine what the set-decorating GameGrl magazine from Jane Crocker’s bedroom might actually be like, it’s pretty easy for me as a child of the 90’s to imagine how the magazine might have looked in the era of the Burger King Kid’s Club and Lisa Frank. With GameGrl I attempted to capture a lot of the basic messages perpetuated to girls by children’s advertising in the 90’s:

The music was a hodge-podge of a lot of things - the production style of early 90’s house music (Deee-Lite and Cathy Dennis were my main references) was coupled with the intentionally insipid rap vocals in a time in which many game commercials had awful raps. The lead vocals are performed by Tavia Morra, whose voice I discovered sounds scarily childlike when sped up slightly. We played the backup track at about 75% speed and had her rap over it to create the vocal comp before speeding it back up to create the cringe-worthy little girl voice. I did a digital process to lower my voice to create the Pokérap-style breakdown towards the middle of the track and then asked Erik Scheele to play a painfully retro midi guitar solo.

For the track art (lovingly created and posed for by Tavia) among our many references were Alex Mack and The Olson Twins. The big deal-breaker for us was getting a pair of overalls, a garment seemingly synonymous with the 90’s. We spent nearly three hours hunting for a pair in Austin coming up short at Wal-Mart, Academy, Sheplers, Cavender’s Boot City, Goodwill, a costume store, a paint store, and a plumbing store before finally finding a wearable piece 17 miles out of town at a farm supply store. Apparently humanity had the good sense to wipe that fucking hideous fashion travesty off the face of the earth at the end of the decade (I knew the y2k bug must have done something!) and now only people who actually need them wear them.

We took our pictures at the Japanese-style game center Arcade UFO. Outtakes can be found here.

I don’t even know where to start.

One day Bowman and I discovered that if we pitched my voice up a little higher than where it normally is, then I sounded like a 12 year old girl. The idea for GameGrl came up later and he proceeded to write lyrics that would make any 90’s kiddo cringe at the nostalgia of their childhood and want to do it again.

I had way too much fun recording it to the point that I knocked over a music stand from dancing too much. Bowman was a fantastic coach. It’s always a pleasure to work with him.

The track art has more of a story to it than I would have cared for, but Bowman and I both knew we had to go all the way with the track art. And so begun our quest for the GameGrl outfit, which we found all of the clothing elements for except for the overalls.

We figured we were just going to go around the corner to the Goodwill, find a pair of overalls, slap those suckers on and get the track art done within about an hour tops.

We ended up shopping for three hours at nine separate stores before we found those goddamn overalls. Bowman livetweeted our journey:

Eventually we got the overalls and proceeded to take the most fantastic pictures ever. I’ll be posting up some other photos from that day later on so keep your eyes peeled!

All in all, this track is probably the most involved I’d been on a Homestuck album and am so glad it was this one. I had a blast!