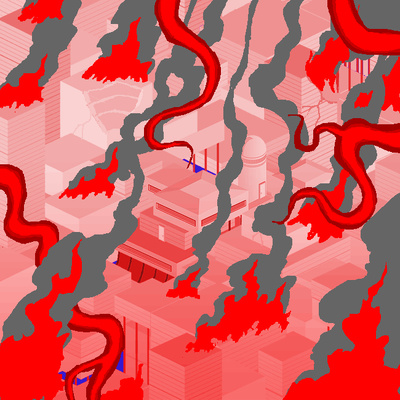 Igor Stravinsky has been a gigantic inspiration for me for a long time. My favorite piece of all time is his Firebird Suite, and not far behind is his other ballet the Rite of Spring. The latter is the main inspiration behind this track!

I listened to the Rite of Spring quite a bit throughout last year and I really was compelled to write something inspired by it. When the End of Act 5 flash came out, Andrew also revealed the now memetic Red Miles attack. I thought of no better way to elude to two of my favorite things than combining them this way! I set out on the concept of making a Rite of Spring-esque movement to fit the devastating attack.

The direct segment I was trying to parallel is thesecond section. Staccato unbowed strings playing eighth notes on a single chord with an accent pattern. The difference here is that as crazy as that segment may get, Stravinsky wrote the whole thing in 2/4. Red Miles I just had fun and it alternates between 2/4, 7/8, 5/8 and whatever the hell I felt like/8. I had a whole lot of fun with time signatures is what I mean.

The accent pattern I use has a bit of history behind it as well. I’m a band geek if no one had noticed yet, and was heavily into marching band during high school. Being a percussionist, I kind of had a love/hate relationship with drumline warmups. One in particular we played waaaaay too much was the accent to tap exercise. For people who don’t know too much about drumline, it’s just an exercise that warms up the extremes of playing. Most notes are steady pulse beats but then an accent pattern is introduced to differentiate height, sound and velocity between taps (normal strokes) and accents. Ours was called “Cinco de Mayo” because it was mostly in 5/8. I took the same pulse (12 123 12 123 123 12 123 12 12 - accents on 1) and applied it to the strings.

I tried to fully orchestrate it, so the next section introduces an English Horn (oh man english horn I could go on for days about) and a bassoon (also could go on forever fuck yeah double reeds) trading off a little melody between accent patterns akin to Rite of Spring. Then I gave the accent to two timpani (yeah the piece would require two timpanist or an inhuman player) because it’s my favorite instrument and I don’t incorporate enough percussion into my pieces for a percussionist. The next section introduces the first real theme. I originally wrote these melodies messing around with four mallets on a marimba. I was intending on making something primitive like RoS (hence unmoving bassline) and then translated it to piano then full score. It alternates between d minor and D Major just by tweaking around with the F sharp. Fun stuff.

Samm Neiland influenced me in two ways in this piece. The first being the continuation of the accent pattern through the middle sections. I personally really enjoy the piece more because of it. It makes it really interesting because it brings so many different time signatures against each other. The melody is sporadically flipping between 7/8 and 2/4 while the accent pattern is mostly in 5/8. They don’t quite match up either but I fix the problem with a few filler measures with the pulse.

After the middle themes are presented it returns back to the beginning with just the solid accent pattern and the return of the simple trading melody (this time with oboe and bass clarinet). The timpani returns triumphantly afterwards. This time, however, I change it up by immediately jumping back into the strings having the pattern. At this point, the brass and woodwinds are given simple versions of the accent pattern. They all come in at different times creating a really uneven spread. Eventually the upper lines start to contort the line and break into competing dotted rhythms to give a feel of chase. It builds more and more through the ending section up until a sudden cut off.

The final addition by Samm was the diminuendo final chord to ease the listener out of the piece!

As stated earlier, the whole concept is suppose to be giving the terrible fear inducing attack “Red Miles” a soundtrack. The attack is devastating and annihilates all in its way. As we all have heard countless times: you can’t escape the miles. Originally, there was to be a whole lot more to the piece (multiple movements!). I didn’t have anything else in other movements concrete at the time for finalization of Volume 9 so I released the abridged version you have now! Therefore, I like to think of this version as the Diamonds Droog version of the attack. Smaller scale but not any less deudley.

I originally wanted to name it Red Miles (Abridged) but that ended up falling through. It sounds perfectly fine as is anyways. Eventually though, I would love to completely finish the whole work (I’m talking 5-6 movements, all inspired by RoS).

The last section that I described as sounding almost like a chase is purposeful. The concept is that Diamond Droog is releasing the miles upon the universe and the different musical sections are the different scenes of destruction. The final scene where everything becomes hectic is suppose to be Dirk flying through crumbling towers and crazy red death tentacles trying to escape a painful death. The sudden cut off was suppose to be kind of a cliffhanger like “where did he go???” but then the final resolution was supposed to sound similar to a big sigh of relief as he narrowly avoids doom.

Originally, the art was to be done by everyone’s favorite person. Because of silly reasons (really silly, the silliest) it didn’t end up happening though. I freaking loved the art too. Instead though, we have a panel from the comic. It just so happens to be the panel where the miles are about to wreck shit at the abode of my favorite Alpha character. I didn’t know this at the time otherwise I’d never make a reference to such a horrible event :P